Standing up for Israel with Evangelical Christian Group

In 2006 Pastor John Hagee of Texas felt that Israel was going to need someone to stand with her, so he called together 400 Christian leaders and his good friend, Rabbi Aryeh Scheinberg, to help form a national grassroots organization from each state in the union to go to Washington as Christians to stand up for the state of Israel. And so Christians United for Israel (CUFI) began.

Pastor Hagee was one of the keynote speakers at the AIPAC (American Israel Public Affairs Committee) Policy Conference in 2006. His message was so powerful and so heartfelt and so passionate that he received, from the 7,000 or so attending that year, a standing ovation equivalent to the one given PM Ariel Sharon at the previous year’s conference. That year Alan and I also attended, by choice, a breakout session set up as a “town hall meeting” with three additional evangelical ministers who were passionate about Israel. Conference goers were invited to come to the mike and ask them the tough questions, which they did. From each of the ministers, as from Pastor Hagee, the answer was the same. “We do not want to convert you. We love Israel because the Bible tells us to.” And then they quote Isaiah, “God blesses those who bless Israel.”

In ten years, CUFI has grown from 400 Christian leaders to 2.2 million members in all 50 states of America. It is the largest pro-Israel organization in the world … and it is still growing. Pastor Hagee says “During the last crisis of the Jewish people, Christians were silent; this time, not on our watch!”

Our personal connection to CUFI began about 5 years ago in Connecticut when we met Pastor Victor Styrsky, the east coast director, and hosted a luncheon for him to meet leaders of the state’s Jewish community. From that luncheon he was introduced to an African-American pastor with a 10,000 member congregation from which he drew 2,000 attendees at A Night to Honor Israel in the Hartford area.

The entire focus of the 10th National Summit this July was to “stop the bomb!” We were proud to stand with the 5,000 evangelical Christians in attendance and then to go with them to Capitol Hill to try to influence our members of Congress.

Also announced at this summit was the inauguration of a new arm of CUFI—Washington Action Office that will be based in the capitol and be able to lobby Congress on a daily basis on Christians United for Israel’s ONE issue: Israel. It is so much more effective for Christians to argue for Israel on our behalf and this is such a powerful and growing organization. Soon a branch of CUFI will be inaugurated in London, where the first “Night to Honor Israel” was held two years ago.

The timing of this conference could not have been more significant. On the morning of the very day we were scheduled to lobby our members of Congress, the P5+1 had signed an agreement with Iran.

For those of you not familiar with the perhaps uniquely American system of “lobbying,” the term comes from when those seeking to influence their elected officials would corner them in the lobbies and halls of the Congressional office buildings to try to persuade them on certain issues. In actuality, at these conferences the sponsoring organization attempts to set up specific meeting times for constituents with their respective members of Congress.

Pastor Hagee said that the state department has been groveling before Iran. “You have the chance to tell Congress, ‘Stop the bomb! Vote it down!’”

Yes, he was fired up. And people stood to applaud and, being a Christian group, shouted “Amen!” 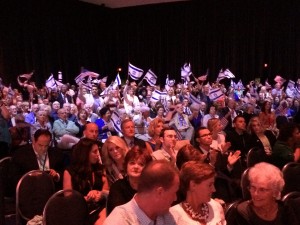 He quoted St. Paul, “You do not support the root; the root supports you.” That root is Abraham, Isaac and Jacob. If it weren’t for the Jewish people, none of us would be here.

And, he said, “After 4000 years it’s time for Washington to get the message that Jerusalem is the capital of Israel.”

Thus you have the gist of Hagee and CUFI’s message about Israel and the Jews. We need to be friends with these people. They are on our side. There are so many more of them than there are of us and they want to help us fight our fight for Israel.