Talk given by Rabbi Reuven Hammer, on Monday 12th December 2016 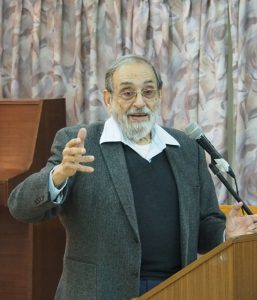 Rabbi Hammer made aliyah in 1973. He spoke about his latest book on Rabbi Akiva who he calls the greatest of our sages even though Akiva was never head of a rabbinical school, a yeshiva, or the like. Hammer’s book is based on scholarship, not myth. He went to the original sources for his facts and he debunks many myths that are told around Akiva.

Rabbi Akiva lived during the second half of the first century of the common era and during the first half of the second century. There is a legend about Akiva that says that when Moses was going up to heaven to receive the Torah, he had a vision of God–he saw him sitting there and writing the Torah. Moses saw God making marks, the “crowns” atop some of the letters in the Torah. Moses said to God, “Why the ornamentation?” The answer was that “a time will come when a man named Akiva ben Josef will interpret all these crowns as a method of interpreting new laws.”

Moses asked God to see and hear such a lesson. God showed him a vision of an academy at which Akiva was teaching. Moses didn’t understand a word that Akiva was teaching and he was disturbed. At the end, Akiva says “It is the law according to Moses given at Sinai.” Having seen this, Moses asks God “Why not give the Torah to Akiva and not to me?” He asks what happened to Akiva, what was his reward for greatness? God says “He dies.” Moses says “That’s the reward?” God says “Be silent; that’s my decree.” Rabbi Hammer says that puts Moses and Akiva on the same level.

Hammer speaks of Akiva the maverick. He says Akiva was unusual. He said and taught the unexpected. Colleagues and students were surprised about what he taught. Akiva was willing to change and innovate as was necessary. Akiva said that at the time Israel was enslaved in Egypt, God was also enslaved. When Israel was redeemed from slavery, God was redeemed from slavery.

Akiva went to visit the ruins of the Temple in Jerusalem. Akiva was born about the year 50 and the Temple destroyed around the year 70. Akiva lived on the coastal plain near Lod. He was a child of a poor family; his father was a common laborer and ignorant. It was not a particularly observant family, so Akiva may never have really seen the Temple in all its glory. He and three other sages went up to visit the ruins of the Temple. The only part left was the Kotel HaMaravi, which is NOT the same thing as today’s “Kotel.” The Kotel HaMaravi was the western wall of the Holy of Holies. It is suspected that the Romans left that wall as a way to say that something monumental was there and they destroyed it. Wild animals were roaming in the ruins.

Akiva and the other sages went up to Mt. Scopus and saw the view of Jerusalem. Then they went to the Temple Mount itself and rended their garments and began to weep. Akiva began to laugh. Why did he laugh? He said that there are two prophecies regarding this place: (1) Jerusalem and the Temple will be destroyed and wild beasts will roam; (2) Jerusalem and the Temple will be rebuilt and our people will find joy and happiness. Akiva said “Now that I’ve seen the wild animals, I know the second prophecy will come true.”

Rabbi Hammer speaks of Rabbi Akiva as a mystic. Jewish mysticism had a strong hold on the people. Some four sages entered into “pardes” (literally, “orchard” in Hebrew but also means Paradise). One had to know what to do and say to get to this state [of mysticism]. It took practice and was considered to be dangerous. Of the four sages who entered, one went mad, one became an apikoros (apostate), one died, and only Akiva entered in peace and came out  in peace.

Rabbi Akiva lived at the time of Rabbi Ishmael. Ishmael said that the Torah was written in human language, that the words have the same meaning in Torah and in speech. Akiva believed that God wrote the Torah in heaven, that it was a blueprint for the universe, and that the words were mystical, divine, supernatural and that all could be interpreted. When Akiva saw the word “et” את (which is a word with no translation but indicates that the following word is a direct object), he said it’s there because you have to figure something out that’s added. If a word is doubled (there are many in the Torah), there are two meanings according to Akiva. Rabbi Akiva added new interpretations and meanings and was able to spread and to grow Torah and new laws.

Akiva came from a family of no “yichus” [pedigree] which did not stand him in good stead; he was passed over as head of the academy despite his learning. One legend has him, a poor, ignorant shepherd, going away for thirteen years to study because the woman he loved, Rachel, said she’d marry him if he became a sage. Neighbors commented to her that her husband was away so long and she said that she wouldn’t mind if he went for another thirteen years as long as he became a great sage. They then marry [after the twenty-six years of study].

A second legend from a later text said he went away to learn with his son. Akiva was a brilliant man. The academy was right there in Lod. He didn’t have to go away to study. Rabbi Hammer thinks that this later legend is closer to the truth about Akiva and his learning.

Akiva had to be disciplined four times at the academy. He took his discipline with love. No source says what were his infringements, but Rabbi Hammer is itching to know.

Rabbi Akiva was part of a contingent of four rabbis who went periodically to Rome. Why? To raise money for the poor? To seek favor from elders in Rome?

Rabbi Akiva was aware that the traditions of Judaism were being forgotten. Only the Torah was written down; the rest was oral. According to Rabbi Hammer, the most important work Akiva did in his lifetime was to remedy this situation. The fear was that the oral law would be lost. Therefore, he made it his life’s work to gather these laws (he sent his students out to listen to people) into the oral torah. He organized it into sections based on themes such as holidays, marriage, prayer, damages. Rabbi Yehuda Hanasi finished Akiva’s work and issued the Mishnah.

There are also legends surrounding the end of Rabbi Akiva’s life. He lived around 80 years. Jews were restless and beginning to prepare for another revolt against Rome. Akiva believed that the third Temple could be built and Rome overthrown and he believed  in a man who could be the messiah–Bar Kochba. Rome issued the Hadriatic decree against Judaism, meaning that Jews were forbidden from saying the Shma aloud and they couldn’t teach Torah to masses of  people. Rabbi Akiva continued to teach nevertheless. He said “Torah is our life and it must continue.” He was imprisoned for being a teacher of Torah.

In the Jerusalem Talmud, the story says that Akiva was brought before the Roman governor for judgment. It was time to say the Shma. Akiva said it smiling. The governor stopped him. Akiva said that he never knew if [as it says in the Shma] “I could love God with all my soul (i.e. my very life). Now the time has come to show me that I can…” And then he expired during the recitation of the first line. He was not executed. (The Babylonian Talmud tells the story differently.)

The legendary Akiva ben Yosef has fascinated Jews for centuries. Arguably the most important of the Tannaim, or early Jewish sages, Akiva lived during a crucial era in the development of Judaism as we know it today, and his theology played a major part in the development of Rabbinic Judaism. Reuven Hammer details Akiva’s life as it led to a martyr’s death and he delves into the rich legacy Akiva left us.

That legacy played an extraordinarily important role in helping the Jewish people survive difficult challenges to forge a vibrant religious life anew, and it continues to influence Jewish law, ethics, and theology even today. Akiva’s contribution to the development of Oral Torah cannot be overestimated, and in this first book written in English about the sage since 1936 Hammer reassesses Akiva’s role from the period before the destruction of the Temple in 70 CE until the Bar Kokhba revolt in 135 CE. He also assesses new findings about the growth of early Judaism, the reasons why Akiva was so outspoken about “Christian Jews,” the influence of Hellenism, the Septuagint, and the canonization of the Hebrew Bible. Ultimately Hammer shows that Judaism without Akiva would be a very different religion.