Aron Krieser was appointed Chairman of the “Bet Israel” Executive Board in April, 2015. Here is his story. 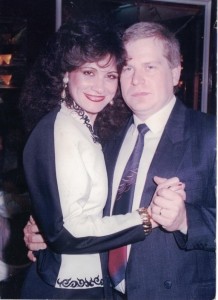 I was born in Sweden, an only child to Holocaust survivors. My parents, both of whom were born in Poland, arrived in Sweden with the Red Cross in 1945. On my mother’s side there were no survivors. My father also lost his whole family, except for one cousin whom he found in Argentina.

My parents’ dream was to settle in Israel, and in 1972 they acquired an apartment in Netanya while on a visit to the city. The following year, I immigrated to Israel and completed my high-school studies here. My mother died in Sweden before my parents were able to settle in Israel, and, in accordance with her wishes, was buried here. My father came half a year later.

After completing my studies, I married Irit, who was born in Israel to parents who immigrated from Libya in 1950. Her father, too, was a Holocaust survivor, suffering in the German invasion of Libya in the Second World War.

My father connected with “Bet Israel” in the 70’s, when it was located in Harav Kook Street.  He started to participate actively, coming to the minyan every morning. At a later stage, when funds were raised to acquire the hall in Independence Square – where  She’arim Netanya is now located – my father would stand at the entrance and give out prayerbooks to the those wishing to pray in the synagogue. Unfortunately, my father didn’t live to see the new building in Yehuda Hanasi Street; he died in 1994.

We celebrated the birth of our daughter, Shirli, at the synagogue in 1977. We have another two sons, Lior and Ariel, both of whom celebrated their Bar Mitzvah at Bet Israel, tutored by our Torah reader, Mordechai Kowalsky. We are grandparents to a wonderful 10-year-old, son of our daughter Shirli.

My wife Irit served in the army and worked for 25 years at Bank Discount as an investment consultant. Today she is involved with painting. I served in the army and was in the reserves until 16 years ago. I worked for eight years as manager of acquisitions, computerization and storage at the new bus terminal in Tel Aviv. For the last 15 years, I have been working in a family business selling automobile spare parts as well as new cars.