Lenore and Morrie are both very active members of our congregation. Morrie is a former President and Lenore a former Vice President. Lenore serves on the ritual and education committees, and leads several weekly shiurim (classes). Morrie is a regular at the daily minyan, for which he provides the “breakfast”, and can always be counted on when provisions are needed. Both Lenore and Morrie make sure to visit the sick and to help anyone in trouble. It’s always a pleasure to listen to their grandchildren recite the Torah and participate in the service. 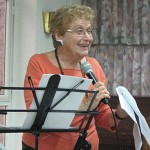 I was born and raised in Chicago, the second of three daughters in a moderately religious family.  In high school, I also studied at the College of Jewish Studies, which accepted high school students and had an active youth movement.  That is where I met Morrie.  I also led a youth group, and on Sundays I taught holiday arts and crafts for a Reform Temple.

I decided to become a teacher and enrolled at National College of Education.  Their program focused on child development,  paying attention to how every child was responding. It also taught learning  through active involvement, how to create your own materials and how to teach every possible subject. I received a B.Ed degree and began teaching in the Chicago Public schools. Morrie and I were married, and a year later he was  drafted into the army.

After basic training, he got leave and we packed up all our belongings in a U Haul trailer and drove across the U.S. to Utah. Dugway was a secret military base at the time,  so no-one could tell us where it was. They just said go to Salt Lake City and ask directions to Dugway Proving Grounds. In Salt Lake City, friendly people showed us where the road began, and said to just keep going until the road ends. We started driving on a steep, winding mountain road. We drove for over an hour with no sign of people, houses, or cars. Finally, the road went downhill and we saw a gatehouse, a very big fence, and fields of stubby grass and sheep. Inside the fence, there was a small housing area. We lived in the most isolated U.S. army base in the world. After Morrie’s army service ended, we remained there. Morrie continued to work as a scientist and I taught first grade. There were only a few Jewish families and some Jewish soldiers there, and I really missed not having an actual Jewish community. Our first child, Naomi, was born in the local army hospital.

Morrie was offered work as a scientist in Kingston, Rhode Island, near the university and we became part of  a small Jewish community, consisting mostly of university professors and their families. Deborah, our second child, was born there. When Naomi was almost eight, and several of our friends also had children about the age when they should start Hebrew school, we talked about how far it was to the nearest Hebrew school and how nice it would be if we could start our own. They asked me to just help them begin organizing things as their friend with a great Jewish background would soon be coming back from California and she would take over running the school. I agreed. I organized a  program suitable for a school with only a few children in each age group. I wrote several articles for the local newspaper to advertise our new Hebrew school, I found space on campus where we could meet, and  I talked to parents and convinced them to register their children in our school.

When the friend came back and heard about the school, she announced that she was a university professor and not a Hebrew school teacher! As a result, I was responsible for a Hebrew School with students but no head teacher. I did not know much about administration, but I knew how to teach. I hired the best Sunday School teacher I could find for the younger children, ordered books, planned the program  and started classes. Eleven years later, when we moved, the school had a solid foundation and had enrolled almost all the Jewish children within a twenty mile radius. The school is still operating and continues to have a good program.

We moved to Rockville Maryland when Morrie changed jobs. Naomi was in college, Debbie was enrolled at a Jewish Day school, and I began working at a teacher’s center, helping teachers design games and activities for their classes in religious school. Later, I became principal of a large Hebrew School.

Finally back in a Jewish community, I began taking classes at Baltimore Hebrew University. Their program covered every major aspect of Jewish heritage. The teachers were excellent and standards were high. I majored in Rabbinic Literature. My thesis was on Shimon ben Azzai, a younger contemporary of Rabbi Akiba, for which I received a prize for the best thesis summited that year. Rather than study in the program for a Ph.D, which was geared primarily for research, I enrolled in a new program for teachers under the Bureau of Jewish Education. It required considerably more courses than a Ph.D, but focused on both Jewish content and specific techniques to teach Jewish ideas and skills more effectively. This degree made me a  gave me a license to teach any aspect of Jewish studies, at any level and anywhere in the U.S.

While I was still taking classes and writing a thesis at Baltimore University, I was asked if I would teach Jewish History to seventh and eighth graders at the Jewish day school. It was the middle of the school year. As I arrived, the students greeted me pleasantly and told me how they had gotten rid of their last two teachers and asked, “Are we going to learn anything today?” I spent a lot of time preparing their lessons, but it was fun. They actually behaved, listened, and even learned Jewish history. Later, I also I developed a special Ulpan for youngsters who had just come from Russia or Iran. They learned basic Hebrew, Jewish traditions, customs and holidays.

In the early 1970’s Ethiopian Jews were trying to get out of Ethiopia before it was engulfed in civil war. Several of our friends were actively working to help them get to Israel, but Israel did not want them. How could they get Congress to pressure Israel into welcoming hundreds of  unwanted Ethiopian refugees? They planned a campaign to get thousands of children to write to their Congressional representative and ask them to pressure Israel to let the Ethiopian Jews come. Every Jewish religious school would teach about the Ethiopian Jews, create sympathy and understanding and ask them to help by writing a letter to their Congressional Representative. I agreed to write the educational material. That included historical background for the teacher, four sets of age appropriate stories and activities – for elementary school, junior high, high school and college students. The material was distributed throughout the United States and in other English speaking countries. Thousands of letters were written and Israel began to accept Ethiopian Jews.

When both of our daughters lived in Israel, were married and each had a child, we came to Israel for half a year, lived in Netanya and bought an apartment. It was time for us to make Aliyah. When we came back to the US, we both retired. Morrie had been head of a research lab at the University of Maryland and I had been teaching Hebrew school at Congregation Beth El, in Bethesda, Maryland.

Our family was very happy to have us in Israel. We wanted to join a congregation, so we visited most of the local synagogues. We joined Bet Israel because it was a Conservative congregation, and because everyone was very friendly. We became active members and soon both of us were asked to join the board.

We try to visit our family every week in Modi in, and spend Shabbat with them at least once a month. Our older daughter, Naomi, teaches English and is now studying  reflexology. She has one daughter, Or, who is now fifteen and considering what profession she will choose. Debbi, has three children – Avichai, Haggai and Yael.

Avichai is now 18. He is currently trying to decide which option he will chose when he enters  the IDF. He goes to a Yeshiva where he also learns math, science, computer programing, English and Civics. He runs in marathons and is often in the winners’ circle. Haggai  is now 13 and Yael is now 8. Both have lead their classmates in interschool math competitions. All three can read Torah. Yael was the first girl to ever study with their Yemenite Torah teacher.  All four grandchildren are very talented artists.